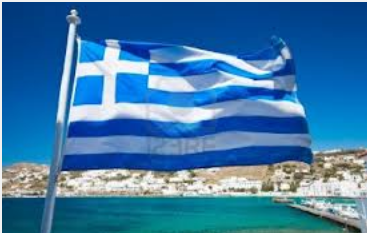 I can’t believe today marks the close of my 6-week Gotham Writers Workshop! This week’s assignment was to revise and refine one of the 5 pieces we’d written for the previous assignments. I chose my non-fiction piece (assignment #5). Our nonfiction assignment was to think of a point in time when I was personally affected by a newsworthy event, and to use that moment as my focal point for writing a short memoir that brings the moment to life. Below is my revised assignment.

Jim simply said “Airport” in a low gravelly voice when he climbed into the old yellow cab. We were both especially tired after the previous night’s adventure. Even through the closed windows of our hotel room, the noise of the people in the streets had been too loud to invite a normal night’s sleep. This morning neither of us was inclined toward happy cabby conversation.

We were side-by-side, holding hands, on the worn back seat of the taxi, headed home after our summer holiday in Greece. Mother Nature had birthed another day just like the fourteen days before. The sky was the same blue as the stripes that grace the country flag, and the sun was hot and rising fast from the horizon. The cab moved with ease along the newly paved road to the airport. The streets were unusually quiet. The city was recuperating, and the calm outside was refreshing.

Kostas, our young Greek cabby with black coffee hair and skin the color of Paradise Beach’s golden sand, did not notice how we relished the peacefulness. His smile reflected the exuberance of an entire country as it reached us in the rearview mirror. He was a live wire, like he’d had a few Red Bulls for breakfast. Over the radio playing local pop tunes, he couldn’t stop talking about the futbol game last night. His voice rose with excitement as he described the critical winning play.

The Greek team had pulled off one of soccer’s greatest historic upsets. They beat Portugal 1-0, in Portugal, at the 2004 Euro Cup. The underdogs had their day, and the fans were intoxicated by the conquest. And, everyone in Athens was a fan. Millions of people high on their boys’ domination at the competition.

We remembered the night before and the vibrancy of the big game, how the experience was a delicious holiday desert. Every square in the city was full of energy, and the tables and chairs overflowed from outdoor cafes. Large screen TVs were set up on the patios outside, with every eye glued to the screen. As the action of the game unfolded, there was a rhythm to the crowd. Like waves, there were eruptions of cheering, followed by stretches of silent intensity, with the occasional group groan.

We’d loitered on Monastiraki Square after dinner. The pull of the crowd had lured us in. Decked out in our newly purchased matching white T-shirts bearing the Greek flag, the locals were welcoming. The collective energy of the city drew us into its midst, and we watched the game like it was one of the University of Georgia football games of our grad school days. We cheered as players with vowel-filled names like Zagorakis and Seitaridis made a play after successful play.

The city had erupted like a volcano when the game ended in victory. We were swept up in an explosion of joy.  People everywhere danced and hugged and cheered, “Hellas!” As we walked back to the hotel, our hands held together spoke silent words of gratitude – what a capstone to our vacation! We’d smiled at passersby and joined in the camaraderie: “Hellas!” From our room at Hotel Atalos, we watched fireworks dance in the sky. The music of fire crackers popped. A low roar permeated from everywhere as people continued into the night in celebration.

In the cab, our memories of the previous night having risen like morning pastries in the quiet neighborhood shops of the recuperating city, we succumbed to the energy still sizzling the morning after. We smiled at each other, in that way that communicates something shared, as if it included a secret wink. Before we knew it, tumbling from our lips it came: “Hellas!” For Kostas and the happy people of Greece we gave one final cheer.